Christie Rodrigues will never forget the winter she watched one of her athletes practice landing a triple axel — one of the most difficult jumps in figure skating. Rodrigues was training a variety of winter athletes at Canada Olympic Park, but she remembers the figure skater most.

Until one day, she did.

This hard-won moment of success was the result of good coaching, focused training, and sharp performance analysis. It finally enabled the skater to get her rotation just right, in that split second when she was suspended above the surface of the ice.

Rodrigues, who currently heads up LaunchPad by Vog as Director of Operations, sees a lot of parallels between the development path of an athlete and a developer in the tech industry. Failure, struggle, improvement, improvement again, and ultimately – success. But to make it happen, both athletes and developers require the right training programs. 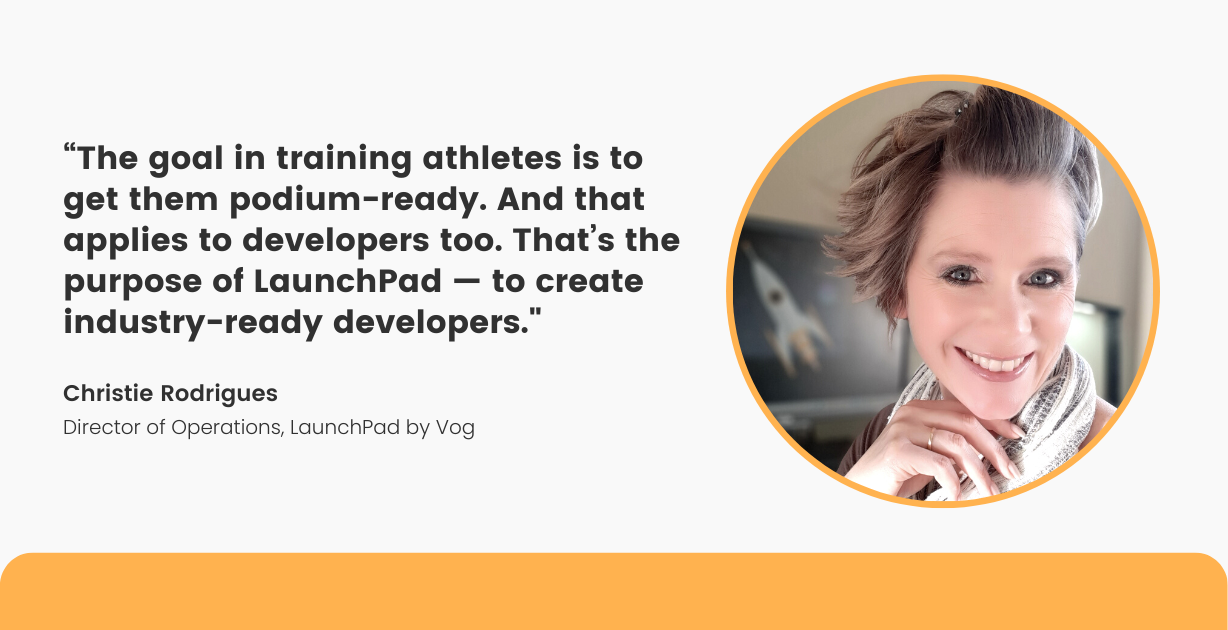 “The goal in training athletes was to get them podium-ready. And that applies to developers too,” says Rodrigues. “That’s the purpose of LaunchPad – to create industry-ready developers.”

Unlike many university or college programs, LaunchPad is a practical, hands-on accelerated learning program that exists inside the tech industry, not outside of it.

LaunchPad enhances participants’ coding skills in one of four areas of concentration (front-end, back-end, Android or iOS) along with offering a program targeted at junior developers.

LaunchPad provides developers the chance to improve their skills on real life-inspired tech projects, deep immersion in the culture of technology, and “dev-to-dev” mentorships over the course of a 16-week program that runs multiple times each year.

“LaunchPad was actually originally created and developed for our team at Vog App Developers, because tech is constantly evolving and changing – and we wanted to make sure our developers had the tools and resources they needed to be successful in their roles, and the industry,” says Rodrigues.

“But then we realized how extensive the gaps were in the new developer pipeline. Even people who had dedicated months or years to education often weren’t ready for the tech industry. So, we expanded the program to include outside applicants.”

Companies across North America are struggling to find development talent

LaunchPad exists at a time when Canadian companies are on a near-constant hunt for talented developers, the demand for app development is exploding, and the world’s biggest tech players are increasingly expanding operations in Canada.

And it’s not just Canadian companies that are struggling to find the development talent they need, either — it’s everywhere.

According to U.S. Labor statistics in this Forbes piece:

“By 2030, the global talent shortage is expected to reach 85.2 million. Сompanies worldwide risk losing $8.4 trillion in revenue because of the lack of skilled talent.”

Rodrigues believes that part of the talent problem is that many educational options for students looking to become developers or refine their development skills are too disconnected from industry realities.

“Some of the university programs are too theoretical in nature. Or they focus too much on group work, and students don’t come out with enough individual experience applied in real-world settings. And then there’s the core business skills and exposure to tech industry culture that round out development skills. They don’t graduate with enough of that.”

Because the LaunchPad program sits inside the tech industry, it offers a differentiated, ever-changing approach to its curriculum. In addition, Vog App Developers’ business constantly pushes LaunchPad to adapt and change its curriculum in response to what the industry needs. This happens with almost every cohort, Rodrigues says, in order to ensure the program is always connected to what’s happening in tech right now.

Plus, LaunchPad doesn’t just focus on coding skills — it also helps participants upskill in areas like business logic, critical thinking, collaboration, and problem-solving. These are all essential skills for strong, well-rounded developers.

“When you talk to a client, they usually don’t have a computer science degree,” says Rodrigues. “So, we teach our developers how to take a client’s idea and figure out how to build something from it. That’s not taught in university but that is the essence of LaunchPad. Building businesses, not just building software.”

One thing LaunchPad doesn’t do is promise to turn junior developers into full-stack experts in a few months. According to Rodrigues, this is a common problem with some other boot camps offered across the industry.

“You don’t just become a full stack developer because you took a single course or bootcamp,” she says. “We know the people graduating from these programs are not full stack developers even if the programs claim that. Where we’re different at LaunchPad is we want developers to specialize and be good at one area and then build on it over time.”

Beyond the developer gap, LaunchPad is also designed to help address some other issues in the current talent market. The program is working with Immigrant Services Calgary to help people new to Canada upskill and start careers in the tech industry, and it’s also helping retrain people who have pivoted jobs as a result of pandemic-driven job losses.

One of the areas that Rodrigues is most passionate about is the program’s potential impact on women in STEM (Science, Technology, Engineering, and Math).

“Tech and development have always been male-dominated,” she says. “It’s sad but there are women who go into STEM fields and then they leave. But women see things differently and it’s crucial to get female perspectives on projects. That’s why I’m proud that we’ve had women in every LaunchPad cohort since I joined. LaunchPad is helping keep women strong and empowered – and it’s keeping them in the industry because they have the support they need to grow.”

Ultimately, the proof of LaunchPad’s success lies in the fact that 88% of program students land development roles in the tech industry, with many of the graduates staying at Vog App Developers.

“A lot of students use LaunchPad as stepping stones to join us here at Vog, which is amazing,” says Rodrigues. “We want the best of the best because we have extremely high standards.”

Being a developer can be a tough job. Platforms change, there are always many ways to tackle a problem, and best-practice approaches will evolve over time. The ways in which your developers stay on top of changes will distinguish bad, from good, from great.

“And it’s very empowering for students to know that once they complete the program, they’re ready for Vog. Of course, I can’t hold onto everyone in the program. There are people that go work at other organizations.”

“But we are teaching organizations there is no risk in hiring a junior developer because of the quality of people we’re graduating each cohort. And ultimately, that’s also a success for LaunchPad. We’re helping to grow the talent base in our industry.”